One of my favorite crosses! ...a sessile greenish A. lewallei with a somewhat warty appendix crossed with a long peduncled, dark red A. maximus with a long and slender appendix!!! ...told from the petioles there are some promising intermediate forms in here ...personally I like very much the red-lined petiole some of the hybrids exhibit! 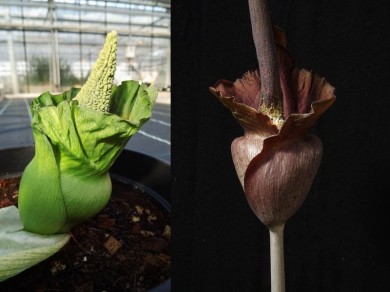 A. lewallei and A. maximus

The first one of this cross flowered in spring 2013 - after two growing cycles only! from seed to flower in two years, this demonstrates very well the growing properties of this cross! I was rather disappointed in the beginning as the inflorescence seemed to look rather "muddy". But in the end I was VERY pleasantly surprised!!! please keep in mind that the tuber is far away from having reached its maximum dimensions, thus the inflorescence is likely to become pretty big in the years to come. Have a look... ﻿

After a long hibernation time I intend to make some updates now and in the new future.

A few selected plants will be released as cultivars.